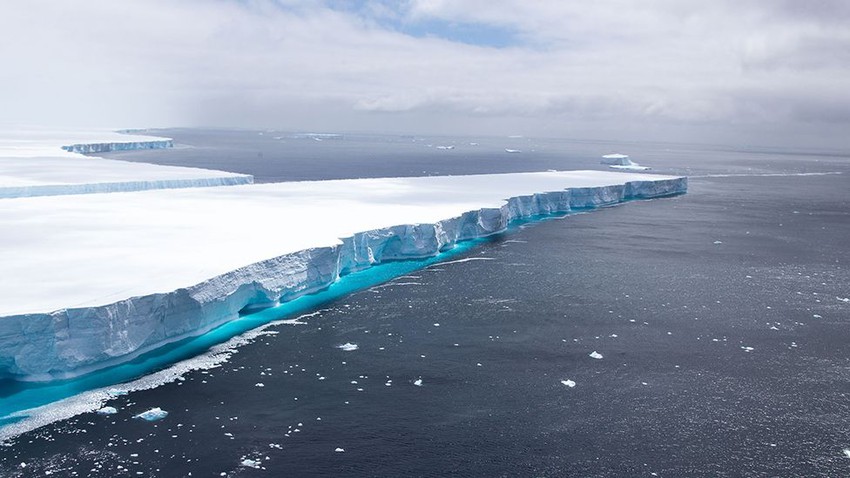 Weather of Arabia - Scientists from the University of Leeds reported that a huge iceberg, which was three and a half times larger than the city of London, released 152 billion tons of fresh water into the ocean, after it separated from Antarctica and crossed the island of South Georgia last year.

The iceberg began its epic adventure three and a half years ago, when it broke off from the Antarctic Peninsula and traversed nearly 2,500 miles across the Southern Ocean, and since then experts have been using satellite imagery to track it.

The massive A68A iceberg, which broke off the Larsen-C ice shelf in Antarctica in July 2017, floated in warm waters and was threatening the island of South Georgia, an important sanctuary for penguins, seals and other wildlife.

The European Space Agency said in a statement issued on Thursday (20 January), that the iceberg "released 152 billion tons of fresh water near the island, which may have a profound impact on the marine life of the island."

The University of Leeds in the United Kingdom indicated that this is estimated to be 20 times the amount of water in Loch Ness or 61 million Olympic-size swimming pools.

A68A melted over a three-month period in 2020 and 2021, according to the scientists, who said this began when it entered the seas around the South Antarctic island in southern Georgia.

When it first broke off from the ice shelf, it was the largest iceberg on Earth, and it made headlines around the world during Christmas 2020 after an alarming approach to South Georgia, sparking fears it could harm a fragile ecosystem.

Scientists from the Center for Polar Observation and Modeling (CPOM) and the British Antarctic Survey (BAS) used satellite measurements to map the area and thickness of the A68A iceberg over its life cycle.

The team found that it had melted enough as it drifted to avoid damaging the sea floor around South Georgia.

However, one side effect of the melting is the huge volume of fresh water that is dumped into the ocean near the island

The British research team described this as a disturbance that could have a "profound impact on marine habitats" around South Georgia.

For its first two years, A68A remained close to Antarctica in the cold waters of the Weddell Sea, and experienced little melting.

Once he began his journey north through the Drake Passage, he walked through increasingly warm waters and began to melt.

In all, the iceberg has shrunk by 219 feet from its initial thickness of 770 feet, with the rate of melt rising sharply over time.

The large iceberg also released a lot of nutrients into the ocean along with the fresh water. "This is a huge amount of meltwater, and the next thing we want to learn is whether it's having a positive or negative impact on the ecosystem around southern Georgia," said lead author Anne Brackman Fulgman from the University of Leeds.

And in late 2020, British Antarctic Survey ecologist Gerriant Tarling said dust in the glacier could fertilize ocean plankton in the water, which could in turn provide a boost to the local food chain.