Yemen floods: deaths, including 4 children, and traffic stops in the neighborhoods of the capital, Sana'a 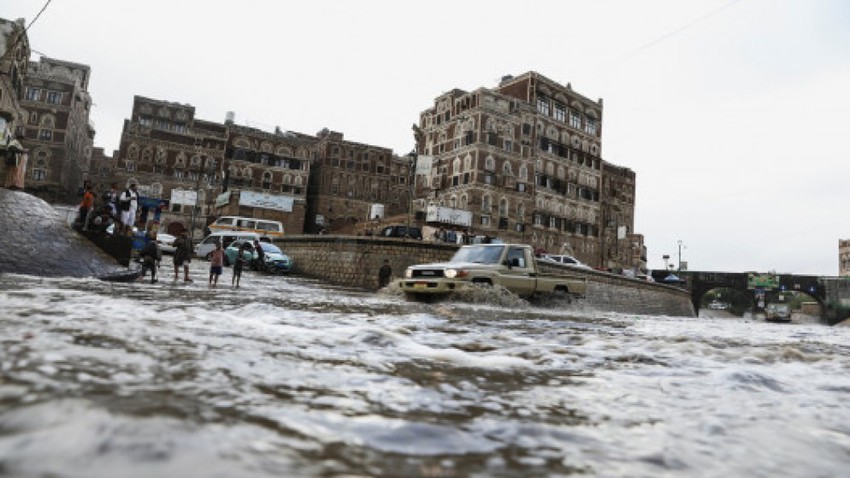 Weather of Arabia - Eleven people were killed in Yemen on Sunday, including four children, as a result of torrential torrential rains that have continued since last week, and their frequency has greatly intensified on Saturday. And the local authorities announced the suspension of traffic in the neighborhoods of the capital, Sanaa.

The death toll rose on Monday and Tuesday to more than 20 people, at least, and the injury of others in a number of governorates of Yemen, as a result of torrential torrents and heavy rains, amid expectations that the coming days will be heavier in rainfall in the entire country.

The Yemeni capital, Sanaa, and its neighboring areas, have witnessed heavy rains since last week, which have intensified dramatically since Saturday.

However, the rain caused the collapse of part of a building in the capital, which led to the death of four children, as the three-storey building is located in a historical neighborhood.

The traffic police in Sana'a Municipality announced on Saturday that "traffic movement has been almost completely interrupted in a number of streets and intersections as a result of torrential rains," according to the Saba news agency, a spokeswoman for the Houthis, who have controlled the Yemeni capital for years.

In Shabwa Governorate (southeast), a woman and a child of one family drowned in the torrential waters, while the people managed to save 9 others after the floods surrounded a car carrying the family of 11 people.

In Dhamar Governorate, south of Sanaa, which is also under the control of the Houthis, six people died as a result of the torrential rains, according to what was reported on Sunday by the "Saba" news agency.

It also quoted the head of operations of the emergency committee in the governorate, Nashwan al-Samawi, that "the torrential rain swept away a car while it was crossing" one of the roads, "which led to the death of six people on board."

As for the scientific reason behind the heavy rains and torrential rains, it is due to Yemen being affected by an air depression in the upper layers of the atmosphere that coincides with the extension of moist and warm air currents with tropical characteristics across the African continent towards the various layers of the atmosphere and also coincides with the extension of moist air currents from the Arabian Sea to the low air, This leads to the formation of thick cumulus clouds associated with heavy rain in many areas, especially the western mountains.

Heavy rains and torrential rains that strike Yemen cause dozens of deaths annually in various parts of the country.

Through the advanced “Weather Watch” software , you can obtain services that help reduce losses resulting from weather conditions by providing weather information and early warning for sectors that are greatly affected by weather conditions through the following link ( click here )

It is noteworthy that Yemen has witnessed a conflict since 2014, between the Houthis and the government, and this conflict has led to the death of hundreds of thousands of Yemenis and pushed millions of them to the brink of starvation. The country is currently in a fragile calm, since last April.

The local authorities are facing difficulties in raising funds for the maintenance of important and historical sites in the country due to the years-old conflict.