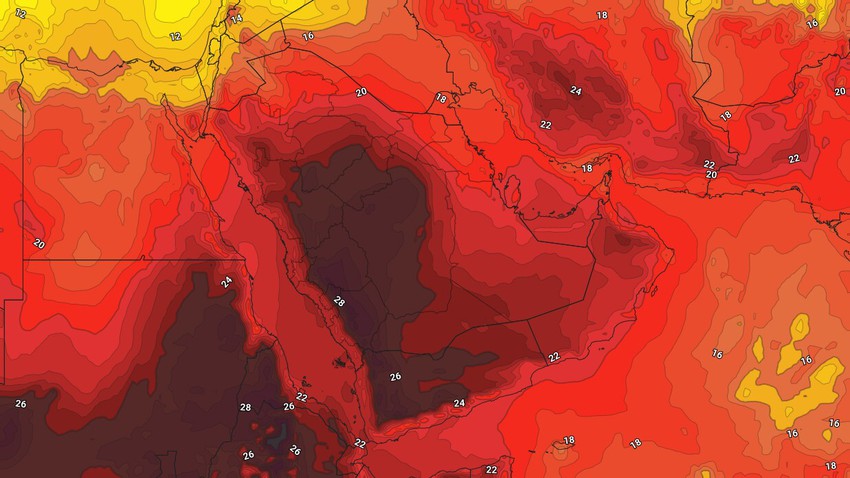 Arab Weather - The latest output of the numerical weather models processed by the Weather Operations Department at the Arab Regional Weather Center indicates an increase in temperatures in the coming days, so that the weather becomes pleasant to moderate in the western mountainous highlands, while it is moderate in the rest of the highlands tends to heat in hours. Noon and afternoon, relatively hot to hot in the rest of the regions throughout the current week, with continued chances of rain clouds forming on the western mountains.

Temperatures in the early 20s degrees Celsius in the western highlands

Continued chances of rain on parts of the western mountains

The flow of moist tropical air currents is declining in the various layers of the atmosphere, especially the structural layers of the atmosphere, but clouds continue to appear at medium and low altitudes, and the possibility of showers occurs on a daily basis in parts of the western highlands. Sometimes, this causes the flow of valleys and the formation of some torrents in some areas, especially in the afternoon and afternoon hours during the second half of the week.

Strong winds and turbulent waves in the Bab al-Mandab Strait

Northeast winds continue to fluctuate, light to moderate in speed, active in some areas, especially the western mountainous heights, working to raise dust and dust in some areas.

While it is southeast, active in speed and accompanied by strong gusts on the Bab al-Mandab strait, it works on high waves and turbulence in the strait and on the eastern shores of the country, with a height of more than a meter.

Cool cold nights in the mountains

Temperatures drop at night during the nights of the week, and the weather is cold in the western mountainous heights, pleasant to moderate in the rest of the regions, tends to be cold over some areas, and it is relatively cold during the late night hours in parts of the southern mountains.