Emirates | Unstable weather conditions in many areas, from Wednesday, for several days, to varying degrees 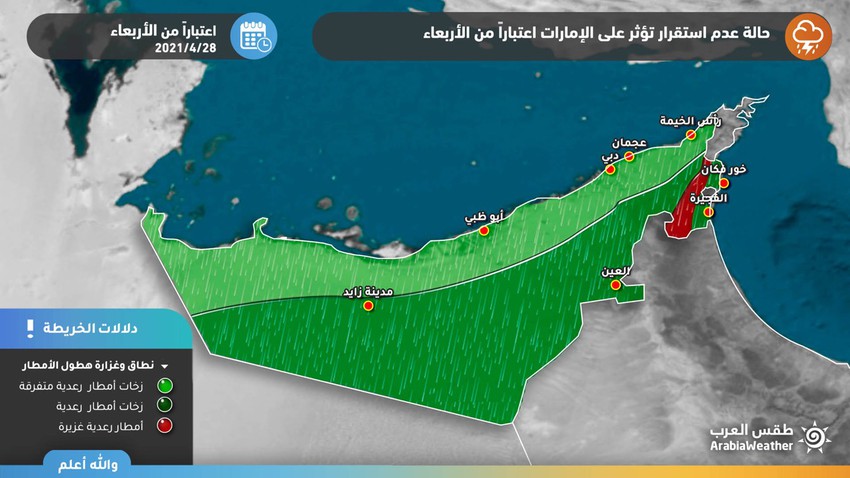 Arab Weather - From Wednesday, the country is gradually affected by unstable weather conditions that will continue until Friday, when showers of thunderstorms are expected to fall in many areas, including parts of the capital, Abu Dhabi.

Details of the rainy situation in the Emirates

The latest weather forecast issued by the Arab Weather Forecast staff indicates that unstable weather conditions will begin in the UAE from Wednesday , when thunder clouds will multiply, especially during the afternoon and evening, and include various regions, including parts of Abu Dhabi and Dubai , and the chances of rain are better on the day. Thursday in Fujairah, Ras al-Khaimah and Al-Ain , and the rain is mostly light to medium intensity, and thunder clouds are actively accompanied by the movement of dusty winds.

On the other hand, there is a significant decrease in temperatures, while the winds will be northwesterly active at speed, with occasional strong gusts, which disturb the sea and the high waves, which will negatively affect the maritime traffic

Decline in thundercloud activity from Friday

The state of atmospheric instability will recede on Friday to affect parts of the eastern mountainous highlands, where the chances of thunderstorms continue to rain in it, and the atmosphere will return to stability on Saturday in all regions of the Emirates.

The scientific reasons behind this air turbulence

The air rises above the waters of the Arabian Sea are expected to intensify, while a thermal depression is concentrated to the south of the Arabian Peninsula, which contributes to the flow of humid winds and fumes from the Arabian Sea, in conjunction with the eruption of less hot air currents near the Emirates that lead to northwesterly winds blowing in the surface of the Arabian Gulf. This would lead to an increase in the quantities of effective moisture in the area (which are between 1.5 km to 5 km from the surface of the earth) sufficient to build cumulonimbus clouds with a vertical extension.

It is advised not to go to the sea or practice marine activities due to its severe turbulence and the high waves along the coasts of the country.

Urgent: The Denmark-Finland match was postponed after Eriksen suddenly fell unconscious during the match

The world is on a date with an important astronomical event on June 21, 2021