How does climate affect mental health 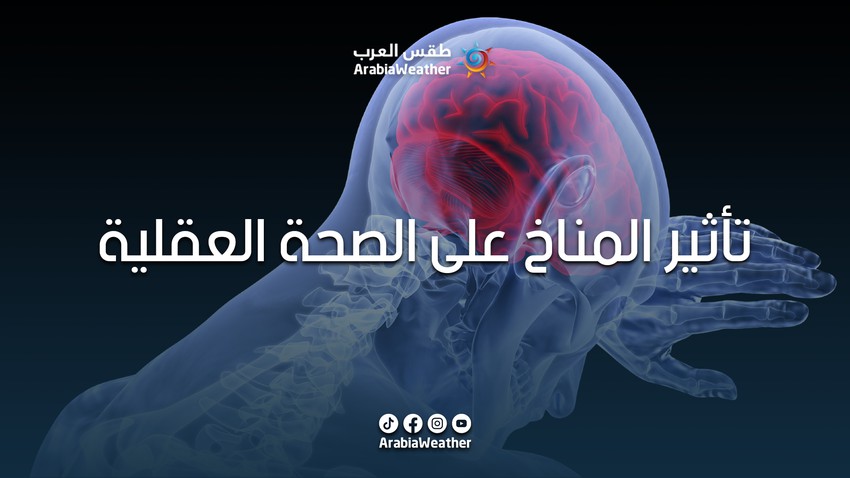 Weather of Arabia - Some people are more vulnerable to the potential effects of climate change, including children, the elderly, people with chronic diseases, people with movement disabilities or pregnant women and people with mental illnesses. Persons of low socioeconomic status, migrants, refugees and displaced persons may also be more vulnerable and affected by changes in weather.

Extreme heat has significant effects on mental health and behavior.

In fact, extreme heat is now the biggest cause of weather-related death, exceeding cyclones, lightning, cyclones, floods and earthquakes combined. India, a country suffering from extreme poverty, experienced the fifth bloodiest heat wave in history in 2015, and this heat wave caused the death of 2,500 people. because of the heat.

By way of comparison, in the United States, the CDC reported that between 1999 and 2010 there were 618 deaths annually from extreme heat, even though air conditioning is more easily accessible than in other poor countries.

Extreme heat can have significant effects on the mental health and behavior of individuals. Here are some of the effects of extreme heat on behavior and psychological states:

Evidence confirms that there is an association between extreme heat and increased aggression, with a standard deviation of high temperature leading to a 4% increase in violence, and this has significant implications for domestic violence and has implications for women and children.
The rate of suicide - a form of violence that turns on oneself - increases during extreme heat. Research shows an increase in suicide rates of 0.7% in the United States and 2.1% in Mexico during periods of 1°C warmer than average monthly temperatures.

One study analyzed more than 600 million social media connections and found increases in depressive language and suicidal ideation linked to higher temperatures; Which indicates a decline in mental health.

A variety of studies support the conclusion that heat impairs cognitive function, as it has been observed that complex cognitive tasks such as working memory (testing spatial extension, pattern recognition) may be significantly impaired by heat stress.

Sleep is an essential function for maintaining mental health and health in general, and sleep deprivation affects mood and cognition.

The natural sleep process begins by decreasing the core body temperature, so the increase in heat contributes to increasing and exacerbating insomnia with increased humidity, with the possibility of exacerbating all psychological difficulties and the individual’s confrontation capabilities, and this has implications for people who live in hot areas, or for people who cannot Access to air or use air conditioning to create a less hot, more comfortable atmosphere.

Cold and its effect on mental health

Research shows that the winter months and the long hours of darkness that come with it can have an impact on mental health often in the form of an emotional disorder called seasonal affective disorder.

Symptoms of this disorder were mentioned in the scientific literature in 1845, but it did not acquire a clinical name until the early 1980s. According to the American Academy of Family Physicians, about 5 percent of the US population suffers from seasonal grief each year, and their symptoms last for about five months.

This disorder (SAD) begins and ends around the same time each year, with symptoms often beginning in the fall and continuing into the winter months. However, there are less common people with the opposite pattern, where symptoms of this disorder begin in the spring or summer. Either way, symptoms may start out mild and become more severe as the season progresses. Signs and symptoms of SAD may include:

The exact cause of seasonal affective disorder is still unknown, but there are some factors that may be considered, such as:

An individual's circadian clock (circadian rhythm): Low levels of sunlight in the fall and winter can disrupt the body's internal clock and lead to depression.

Serotonin levels: A low level of serotonin may play a role in feelings of sadness, a brain chemical (neurotransmitter) that affects mood; Low sunlight in the fall and winter can cause a drop in serotonin levels that can lead to depression.

Melatonin Levels: The change in season can disrupt the balance of melatonin level in the body, which plays a role in individuals' sleep patterns and mood.

Seasonal changes and their impact on bipolar disorder

In some people with bipolar disorder, the onset of spring and summer may lead to symptoms of mania or a less severe form of mania (Hypomania), during which fall and winter tend to be more depressed.

When should you visit a doctor?

It is normal for a person to feel frustrated for some days, but if the feeling of frustration is necessary for the individual for several days and he is not able to motivate himself to do activities that he usually enjoys, then he should consult a doctor, this is important especially if this feeling is accompanied by a change in the pattern of appetite or sleep, or if it begins The individual resorts to drinking alcohol to obtain comfort and relaxation, or if he begins to think about death or suicide.

These annual feelings should not be neglected as just a case of the “winter blues” that a person must struggle with on his own, and it is always advised to diagnose this disorder early to avoid its complications and negative impacts on the individual’s personal, work and social life, and treatment of seasonal affective disorder may include light therapy, medication and therapy psychological.

Practical steps to mitigate the impact of seasonal changes

Regardless of the reasons that may cause your feelings of anxiety during the fall or winter season, there are some steps that an individual can take to maintain his mood and balance, including the following:

to be exposed to the sun

Start by spending more time outdoors to make the most of the sunlight that is out there; You can get up early to catch the morning sun.

Do exercise daily for at least 30 minutes.

"Once the hot summer weather subsides, fall is a great time to enjoy the outdoors, so you can make the most of it by hiking or biking," says one expert.

“Exercise is key across the board for mental health disorders, and various studies show improved mood after exercise.”

Fall is an excellent time to think about what you eat, Morrison says. Another says that fall is a great time to prepare your favorite seasonal soups and warm meals that you didn't eat during the summer.

Impact of hurricanes and extreme weather on mental health

In recent decades, the number of floods and severe weather events reported worldwide has increased, exacerbated in part by climate change.

When severe storms strike communities, such as the massive Hurricane Dorian in the Bahamas, they can cause damage to homes and power lines, putting the safety of residents at risk, but not only infrastructure is damaged, but the physical and mental health of long-term storm survivors can be affected. Even after the storm has passed.

Living in dangerous storms can increase the risk of depression and anxiety, and some storm survivors can develop PTSD or other long-term disorders, but there are clear steps you can take to help people who have gone through a traumatic event.

Experts stress that to reduce the negative effects of severe storms and other disasters, the basic needs of survivors including food, water, shelter and safety must be met, and that support from mental health professionals who understand the effects that disasters can have is also important to help communities and individuals overcome its effects.

Some members of society are more likely than others to experience adverse mental health effects following a disaster. One expert says that the people most likely to suffer after these events are often the most vulnerable people before the event, and it is people with low resources, people with low incomes, and those who do not have a lot of social support who will face the most difficult recovery process. .