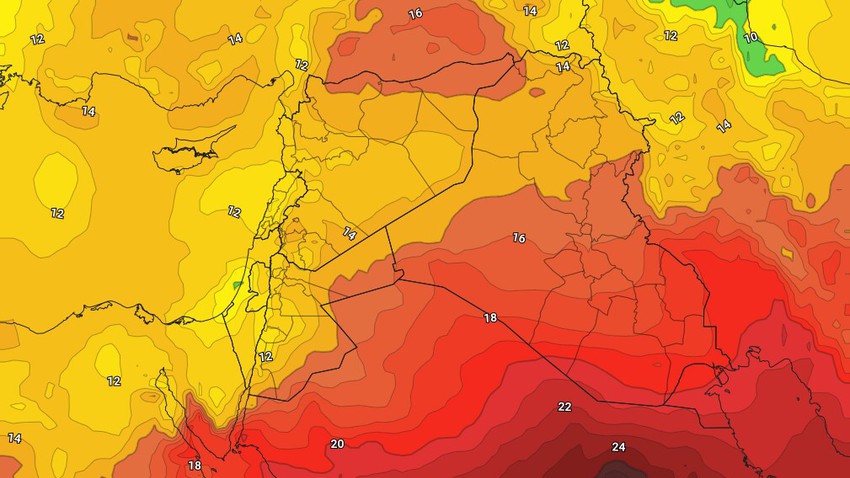 Arab weather - God willing, it is expected that there will be a slight increase in temperatures on Friday, while they remain slightly below their rates for this time of the year. Heat in the Jordan Valley, the Dead Sea and the city of Aqaba.

With the appearance of clouds at low and medium heights, especially in the northern and central regions.

According to the latest outputs of the numerical weather models processed by the Air Operations Department at the Arab Weather Center, it is expected that the Kingdom will be affected again on Saturday by the wet and cold autumn air mass, so the temperatures drop again to be several degrees lower than their rates for this time of the year, and the weather is humid and tilted It is cold in the mountainous heights, moderate in the rest of the regions, tends to heat in the Jordan Valley, the Dead Sea and the city of Aqaba.

With the appearance of quantities of low and medium clouds, especially in the northern regions, where the weather will be partly cloudy to cloudy at times in some areas.

The northwest winds continue to blow in a variable direction of moderate speed, sometimes active over some areas, and they are dusty in the desert areas during the afternoon and afternoon hours.

There is a slight additional rise in night temperatures compared to the previous nights during the night hours of Friday/Saturday, and the weather tends to be cold, becoming relatively cold to cold in the mountainous heights and eastern plains at late night hours, while it is pleasant in the Jordan Valley, the Dead Sea and the city of Aqaba. Cold in the late night hours and dawn.

Coinciding with a noticeable rise in surface humidity, fog forms during the late night hours and early morning over the mountainous heights and eastern plains. It is not excluded that the fog is sometimes thick, causing a decrease in the horizontal visibility.