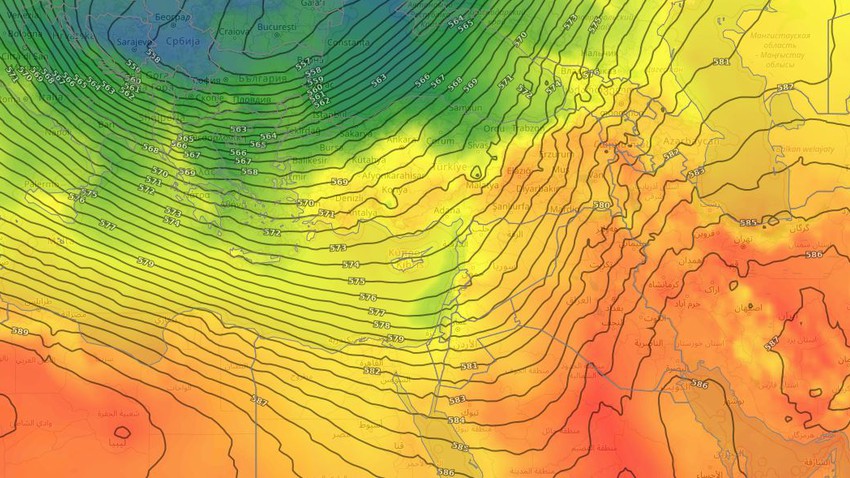 Arab Weather - On Monday, a moderately hot air mass rushed to the eastern region of the Mediterranean Sea from eastern Europe through Turkey, as a result of the concentration of an air rise in all layers of the air over large parts of western European continent, and temperatures gradually decreased from their daily rates. Monday and Tuesday.

It is expected, according to the analyzes of the "Arab Weather" Center, to continue the influence of the moderate temperature air mass on the Kingdom's atmosphere during the coming days, so that the atmosphere will be pleasant to moderate in most Jordanian cities with the appearance of scattered clouds at low altitudes, especially in the north of the Kingdom, while it remains relatively hot in the Badia regions. And the Jordan Valley, the Dead Sea and Aqaba, with moderate westerly winds, which may sometimes activate and raise dust in the desert. Such an atmosphere is suitable for all kinds of outdoor activities, including family trips to all Jordanian tourist areas, extending from the Ajloun Mountains and Irbid plains in the north to Aqaba and its picturesque beaches in the south.

With the setting sun, it is expected that the temperature drop will accelerate so that the weather will be pleasant at first, but soon it will turn with the night hours to become cold in many Jordanian cities, including the capital Amman, with an increase in humidity and the appearance of low clouds in some areas. And the activity of northwesterly winds sometimes, which will also give an additional feeling of coldness in the mountainous areas, and the atmosphere after midnight until the early morning hours becomes relatively cold in many areas, so that the atmosphere is not suitable for outdoor sessions.