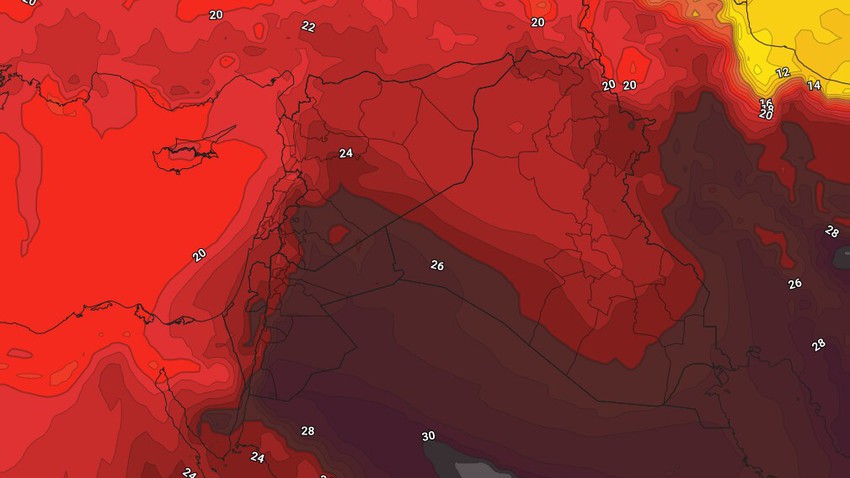 Arab Weather - The initial indicators received from the weather maps at the Arab Regional Weather Center indicate that a hot air mass is approaching from the Arabian Peninsula towards the Kingdom on Wednesday, so there is a significant rise in temperatures to become higher than their rates, and the weather is warm to relatively hot in many areas, It is hot in the Jordan Valley, the Dead Sea and the city of Aqaba, and the winds change direction to northwesterly, light to moderate, sometimes active in the afternoon and afternoon hours.

The Kingdom is increasingly affected by the hot air mass on Thursday and Friday, so there is a further rise in temperatures, and the weather is relatively hot to hot in most areas, and very hot in the Jordan Valley, the Dead Sea and the city of Aqaba, with the appearance of clouds at medium and high altitudes.

The temperatures are in the advanced thirties in the main cities and the capital, Amman, while they are around the forties in the Jordan Valley, the Dead Sea and the city of Aqaba, coinciding with the blowing of the southeast winds.

It is expected that the night temperatures will rise remarkably, especially at the end of the week, and the weather will become warm in the evening and night hours over the various regions of the Kingdom, but it will tend to moderate in late times, especially in the mountainous heights and the plain areas.