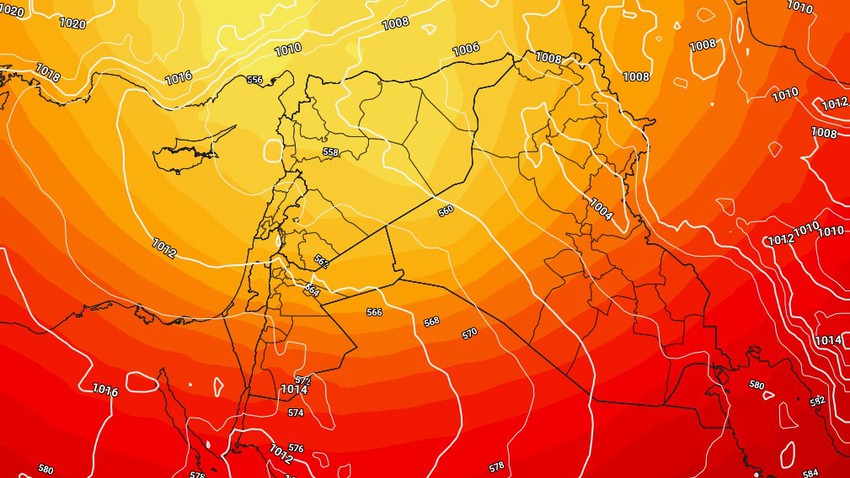 Arab Weather - The latest output of the numerical models processed by the Air Operations Department at the Arab Regional Weather Center indicates that the Kingdom was affected on Thursday and during Friday by a relatively cold air mass, so there is a further decrease in temperatures to be much lower than their rates for this time of the year, The weather tends to be cold over the high mountainous heights, especially the southern ones, while it is pleasant during the noon and afternoon hours in the rest of the Kingdom, and at the same time the weather is warm in the Jordan Valley, the Dead Sea and the city of Aqaba.

The quantities of low clouds are increasing in the atmosphere, so that the weather becomes partly cloudy to cloudy at times, especially in the northern and central western regions, and as a result there is a possibility again of scattered local showers of rain over some areas, especially the northern areas on the morning and before Friday noon.

Westerly winds will blow over the Kingdom in the coming days

From Thursday and Friday, moderate-speed northwest to northwesterly winds will blow over the Kingdom, especially with the afternoon and afternoon hours, accompanied by strong gusts over many areas, especially open and mountainous areas, and they raise dust and dust in the southern and eastern Badia regions. Increased sense of cold during the evening hours.

Twenty temperatures for the next days

It is expected, God willing, that the maximum temperatures on Thursday and Friday will be around twenty degrees Celsius to a little lower in the main cities of the Kingdom, including the capital Amman, while it will be lower in the high mountains, and between the mid-to-late twenties in the Jordan Valley, the Dead Sea and the city of Aqaba.

There is a further decrease in the night temperatures on Thursday night and Friday, and the weather turns at night to become relatively cold to cold in various regions of the Kingdom, and the minimum temperatures will be around 10 degrees Celsius in the main cities, including the capital Amman, which requires the return of coats.

The decrease in night temperatures during the coming days coincides with a noticeable rise in surface humidity, with humidity exceeding the 90% barrier in many areas, so that the weather is dew, and quantities of low clouds spread during the night hours, which will form fog over the high mountain heights.

Jordan: Temperatures are higher than their rates on Thursday, and a chance for showers of rain in the east of the kingdom