Jordan || Starting tonight, Siberian weather is extremely cold, and for several days, accompanied by a significant drop in temperatures, a massive wave of ice and frost 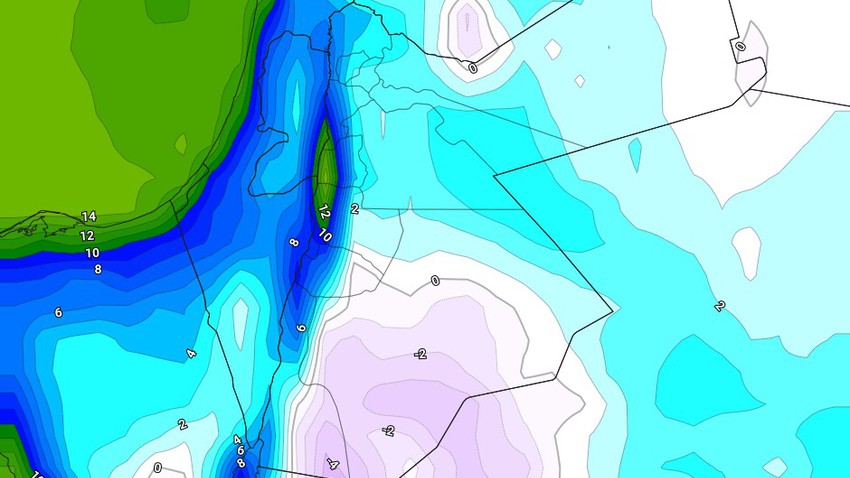 Weather of Arabia - The Kingdom has been affected by a series of depressions since the middle of the month until now, which brought with it abundant amounts of rain and winter weather, but according to the latest numerical weather outputs, the Kingdom is expected to be affected again by the so-called Siberian High Altitude, as of Thursday, and its impact increases during At the end of the week, when the weather continues to be remarkably cold during the day, but it is stable and clear in most regions, and the weather at night remains freezing and very cold with the formation of freezing in many areas.

The southeast winds re-dominate the Kingdom as of Thursday / Friday night and increase in intensity during the weekend, as they become active in speed and accompanied by strong gusts in some areas, which leads to an increase in the feeling of coolness significantly, especially in the mountainous heights.

There is a sharp drop in temperatures, and the weather turns to be very cold in many areas, with the opportunity remaining ready for showers of snow over the high mountain heights, especially the south, in the early hours of the night

And later during the night and gradually, a large-scale snow wave is expected in large parts of the Kingdom.

And the wind subsides at night

The weather is cold in all regions, and very cold over the mountainous heights, but it is stable in all regions, with the appearance of some low clouds in the northern regions of the Kingdom, and the winds are variable in direction, and light to moderate in speed.

The weather will be severe and cold in all regions of the Kingdom, with freezing forming in many regions, including the capital, Amman, in the midst of a great decrease in temperatures, reaching in some areas except below zero degrees Celsius by several degrees, and the winds are southeasterly moderate to speed, activating at times and increasing Feeling cold when active.