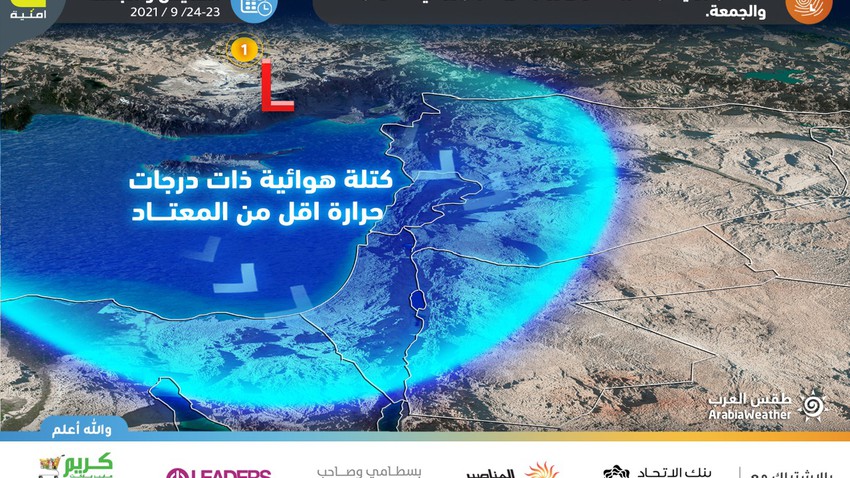 ArabiaWeather - The latest weather models numerical output processing with the Air Operations Section at the Regional Weather Arab Center, to the affected kingdom next two days , the first low air for the fall semester are based on the Turkish territory has been classified as first class (weakest link) and is accompanied by air with temperatures mass less heat The usual brings with it drastic and tangible changes to the atmosphere.

On Thursday, the Kingdom begins to be affected by the first air depression classified as the first ( weakest ) and is associated with an air mass with lower temperatures than it is used to, so there is a significant drop in temperatures on Thursday, to become lower than their rates for this time of the year, and the weather will be Humid and moderate autumn in the mountainous heights, relatively hot in the Jordan Valley, the Dead Sea and the city of Aqaba, with the appearance of clouds at medium and low altitudes, especially in the northern regions, and there is a weak possibility of light local showers of rain in parts of the north of the Kingdom in the morning.

Temperatures return to their twenties in most regions of the Kingdom, while they are in the early thirties in the Jordan Valley, the Dead Sea and the city of Aqaba.

The Kingdom’s susceptibility to the first-class air depression, Friday, increased

On Friday, the Kingdom is increasingly affected by the first-degree air depression, which is marked with an air mass with lower temperatures than it is used to, so that the temperatures drop additionally, to be much lower than their rates for this time, and the weather is humid and cold in the fall over the highlands High mountainous, relatively hot in the Jordan Valley, the Dead Sea, Aqaba, and the Badia regions. 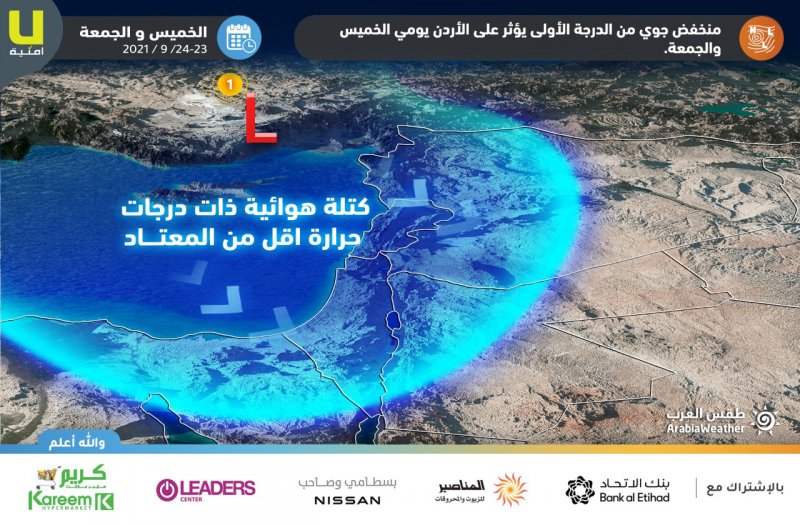 Temperatures will be at the beginning of the 20th in the capital, Amman, and many major cities, especially the mountainous ones, and shifted to below 20 degrees in the Sharah Mountains in the south of the Kingdom, with the appearance of quantities of low clouds, especially during the early morning hours, with the formation of fog in the mountainous heights during the morning due to crossing Low clouds touching the Earth's surface.

God willing, it is expected that the night temperatures will decrease with the night of Thursday/Friday, so that the weather becomes cold to relatively cold in most regions of the Kingdom, with the exception of the Jordan Valley, the Dead Sea and the city of Aqaba.

The decrease in night temperatures peaks with Saturday/Sunday night, so that the weather is relatively cold or colder than what is usual in most regions of the Kingdom, especially the high mountainous heights.

This coincides with significantly high levels of humidity, with the appearance of large amounts of low clouds, and the formation of fog over the high mountainous heights and the eastern plains, and it is not excluded that the fog is sometimes thick.

Scattered showers, may be heavy for some periods

The outputs of the numerical weather models indicate, and as a result of the increased density of low and medium clouds in the atmosphere, sporadic showers of rain are expected on “parts of the north and center of the Kingdom, all the way to parts of the peaks of the Shara Mountains”, starting from the late night hours of Thursday/Friday night and dawn Friday, until the noon hours of Friday, and the first expected chances of rain for the current autumn season, and the rains are of varying intensity, sometimes heavy over some areas for temporary periods, especially with the dawn hours and the early morning hours of Friday, especially in the northern regions.

Westerly to northwesterly moderate winds of active speed will blow over the Kingdom on Thursday and Thursday, and the active winds are accompanied by strong gusts that touch the 60 km/hour barrier over some regions of the Kingdom, causing dust and dust in the desert and open areas.

There will be a decline in wind speed on Friday, so that it becomes moderate in speed, sometimes active and causing dust and light dust in desert areas.

General information about the expected depression 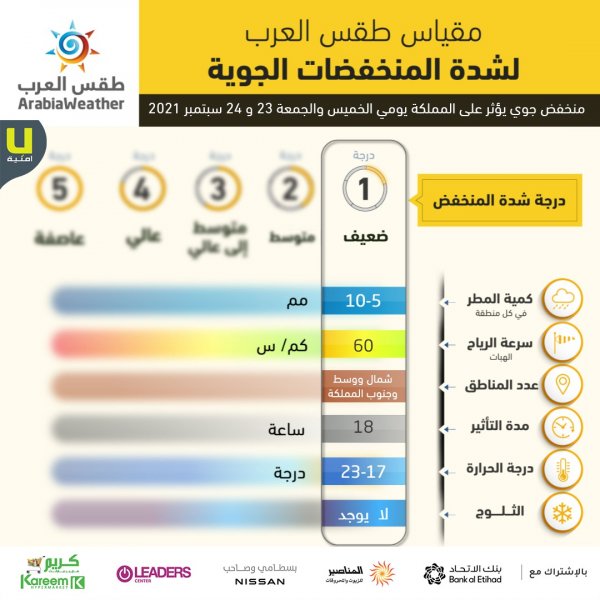