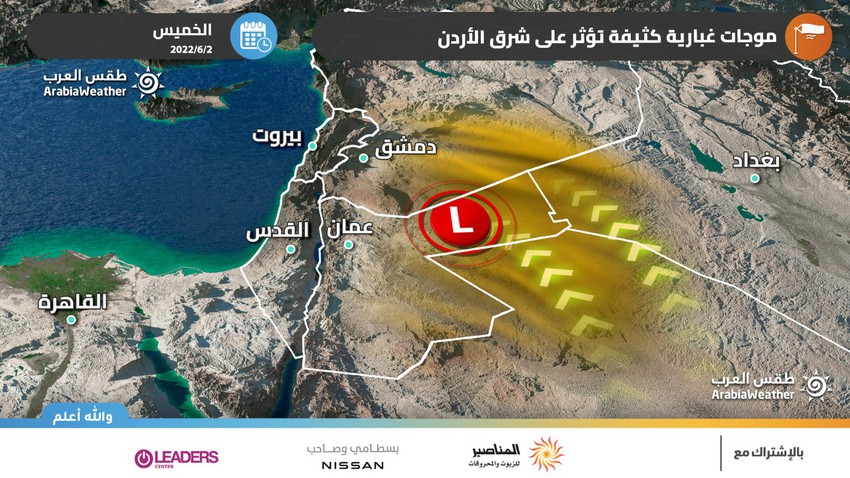 Arab Weather - The weather forecast cadre at the Arab Regional Weather Center is monitoring the concentration of a surface-thermal depression on Thursday near the eastern Badia regions of the Kingdom. It will work on hot, dry, active south winds to strong speed, so that the fixed wind speed exceeds 50 km / h, starting from noon and Thursday afternoon And they are accompanied by severe flashes that exceed the 80 km/hour barrier, which causes the formation of dense dust waves over most of the eastern Badia regions, which causes a significant decrease in the horizontal visibility, and perhaps its absence sometimes as a result of dust density.

According to preliminary indications, the main cities of the Kingdom and the western regions will be far from the effects of dust waves as a result of wind blowing from marine sources.

It is expected, God willing, that the dense dust waves on Thursday will include the Baghdad International Road in addition to the Trebil border crossing with Iraq, so the Arab Weather website advises drivers to reduce their speed and take the necessary precautions to deal with the expected weather conditions.

Respiratory and eye patients are also advised to avoid leaving the house in dusty weather, in addition to the necessity of closing windows to prevent dust from entering homes.