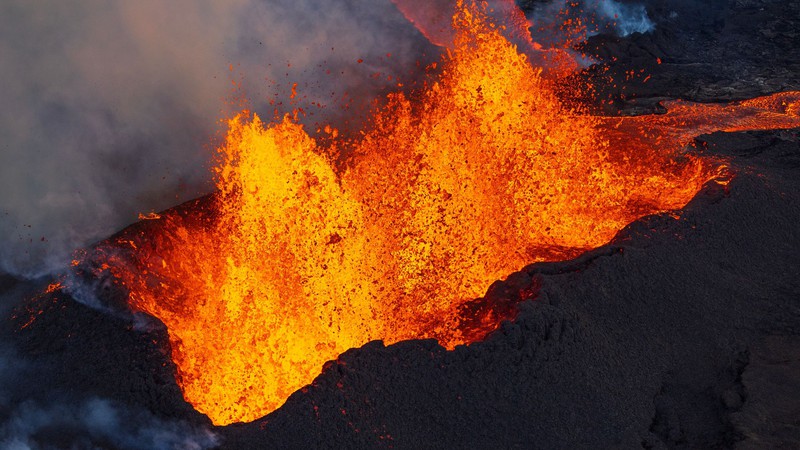 Weather of Arabia - The largest active volcano in the world erupted on Sunday (November 27) after a 38-year hibernation, which aroused the enthusiasm of scientists eager to reveal its many secrets.

The rare event drew thousands of stunned spectators who packed a highway on the island of Hawaii to watch the lava flow before it reached and closed the road.

Mauna Loa is one of the most well-equipped volcanoes in the United States. However, much about the mountain's interior remains unknown. The sheer size, mineral composition, and temperature all present logistical difficulties for scientists and government officials hoping to predict. With its movements, therefore, researchers on the Big Island had to exploit the eruption event with concern for public safety, and try to collect data with the aim of revealing the secrets of the volcano, knowing that no one knows how long this eruption will last. 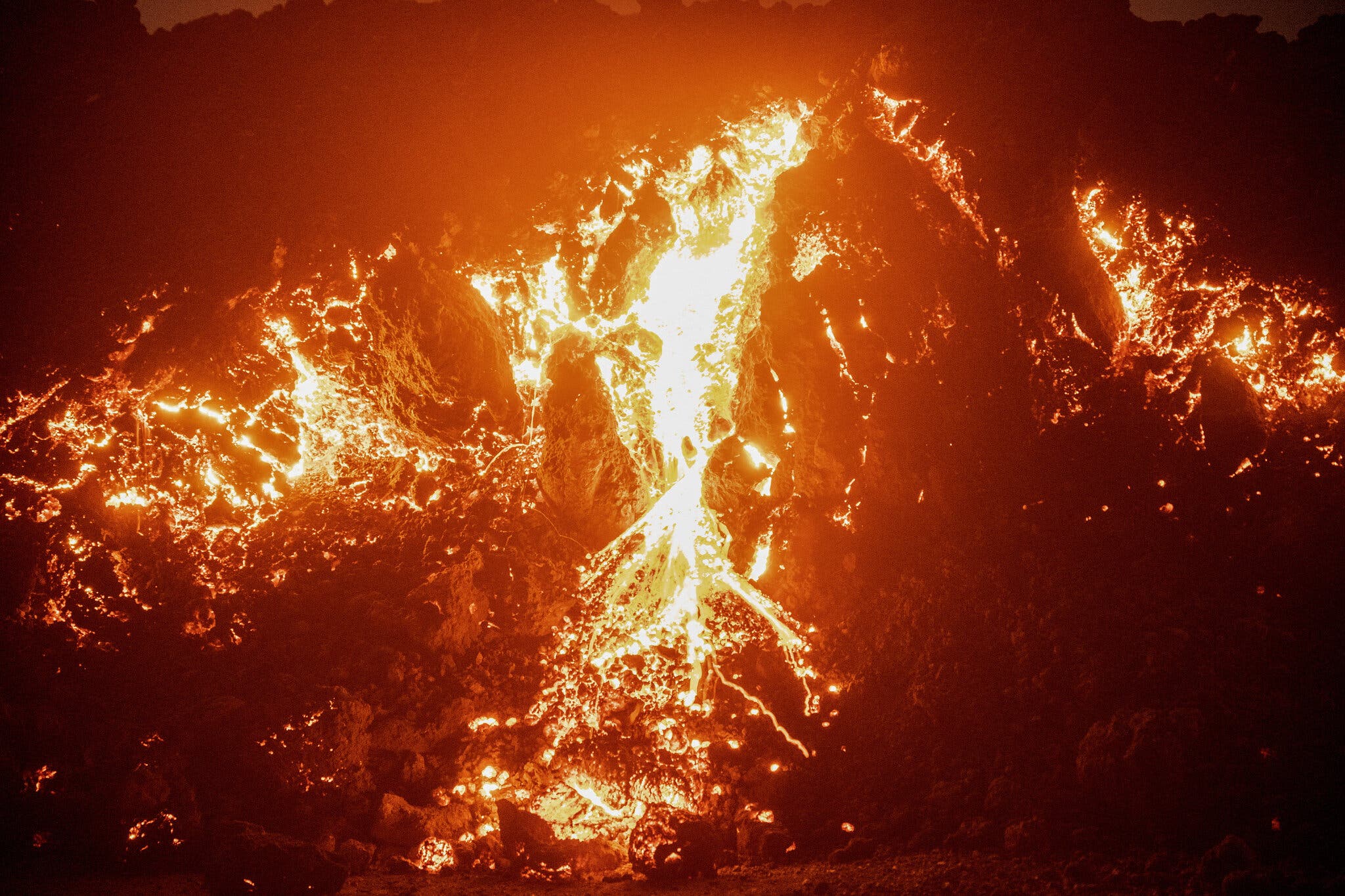 Most volcanoes form above the boundaries of Earth's tectonic plates, where collisions and separations can lead to distorted regions in the crust and upper mantle so that molten rock from the planet's core can rush through to the surface, but the Hawaiian Islands lie 2,000 miles from the nearest tectonic boundary. Its existence has baffled geologists for centuries.

In 1963, a geophysicist named John Tuzo Wilson suggested that the islands, which are covered in layers of volcanic stone, lie atop a magma plume, which forms when rocks flow up from the deep mantle and collect under the crust. This "hot spot" continually hurtles toward the surface, sometimes bursting across the tectonic plate, melting and deforming the surrounding rock as it goes.

The plate shifts over millions of years while the magma plume remains relatively stationary, creating new volcanoes on top of the plate and leaving inactive volcanoes in their wake. The results are archipelagos such as the Hawaiian Mountain Range - Emperor Maritime and parts of the Icelandic plateau.

This hot spot may have been fueling volcanic activity for tens of millions of years, although it only reached its current location under Mauna Loa about 600,000 years ago. As long as it stays there, it will produce volcanic activity, but the closer the activity is to the surface, the more difficult it becomes to predict when, where and how intense these eruptions will be, despite the abundance of seismometers and satellite sensors. The deeper you go, the smoother the behavior becomes as magma tends to come out sporadically.

Understanding the eruption of Mauna Loa

The world's largest active volcano, located on the Big Island of Hawaii, erupted for the first time in 38 years. The magma plume feeding Mauna Loa is composed primarily of molten basalt, which is less viscous than the magma found beneath steeper stratovolcanoes such as Mount St. Helens and Mount Vesuvius. This makes Mauna Loa's average eruption less severe and contributes to the mountain's long profile, which extends about 10 miles from base to summit and covers 2,000 square miles. 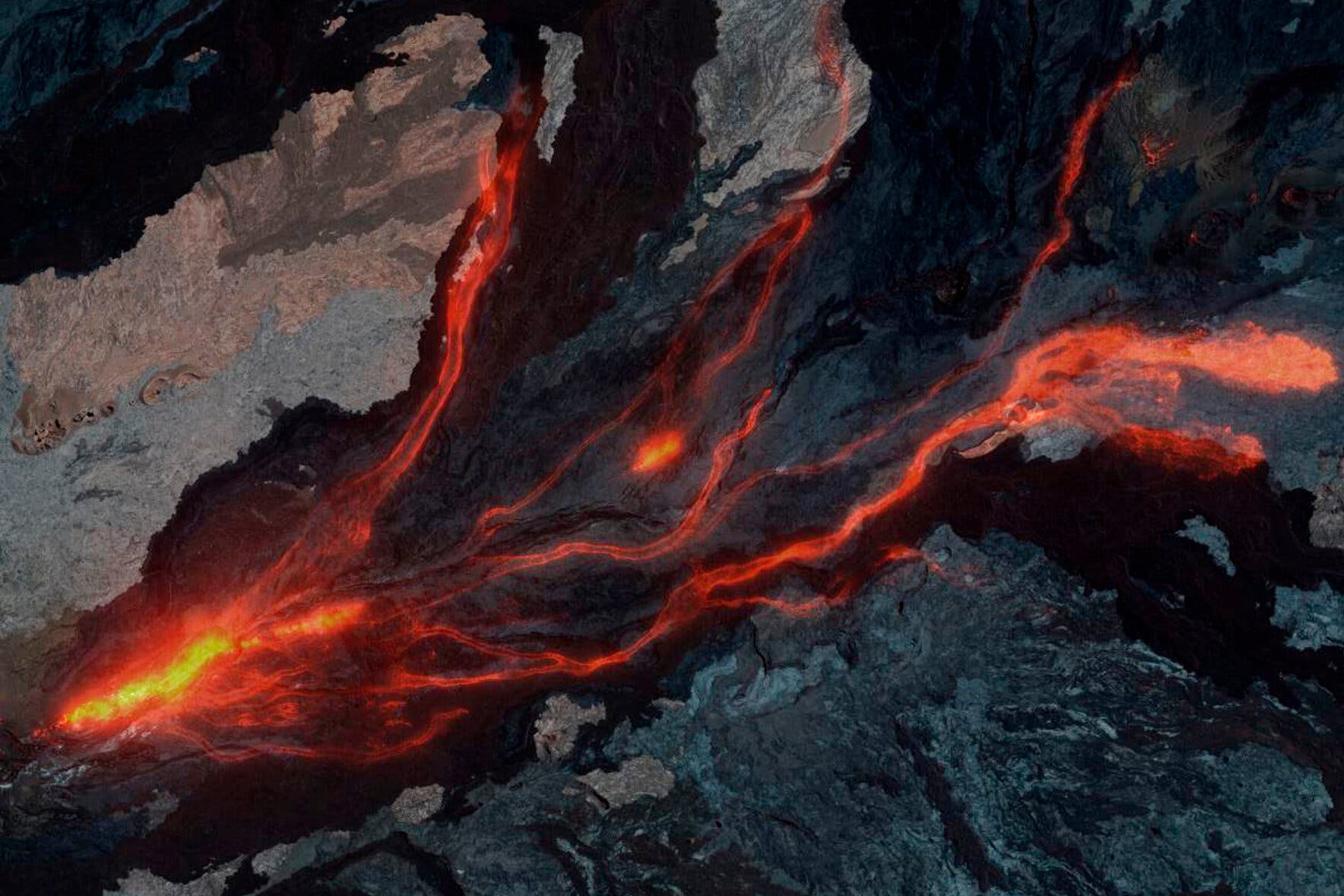 (Satellite image of pyroclastic flows as Mauna Loa stretches 10 miles from base to summit and covers 2,000 square miles - Maxar Technologies, via AP)

It is also difficult for seismometers to detect the motion of thin magma, which makes it difficult for scientists to map the system of melting magma, rock, crystal and gas that fuels the eruptions.

But things change when the volcano begins to erupt. Magma rushes upward at a faster rate, fracturing underground rocks and causing the volcano's surface to swell. These deformations can be captured by seismometers, which detect the depth and intensity of minerals that vibrate and split under the pressure of magma.

Mauna Loa last erupted in 1984, and in the years since, it has remained mostly silent, even as the smaller neighboring volcano, Kilauea, which shares the same magma source, erupts. In 2013, seismometers detected clusters of low-magnitude earthquakes deep within the Earth, most of them caused by rising magma, which is constantly compressing, fracturing rock, creating new magma and forming paths of less resistance. 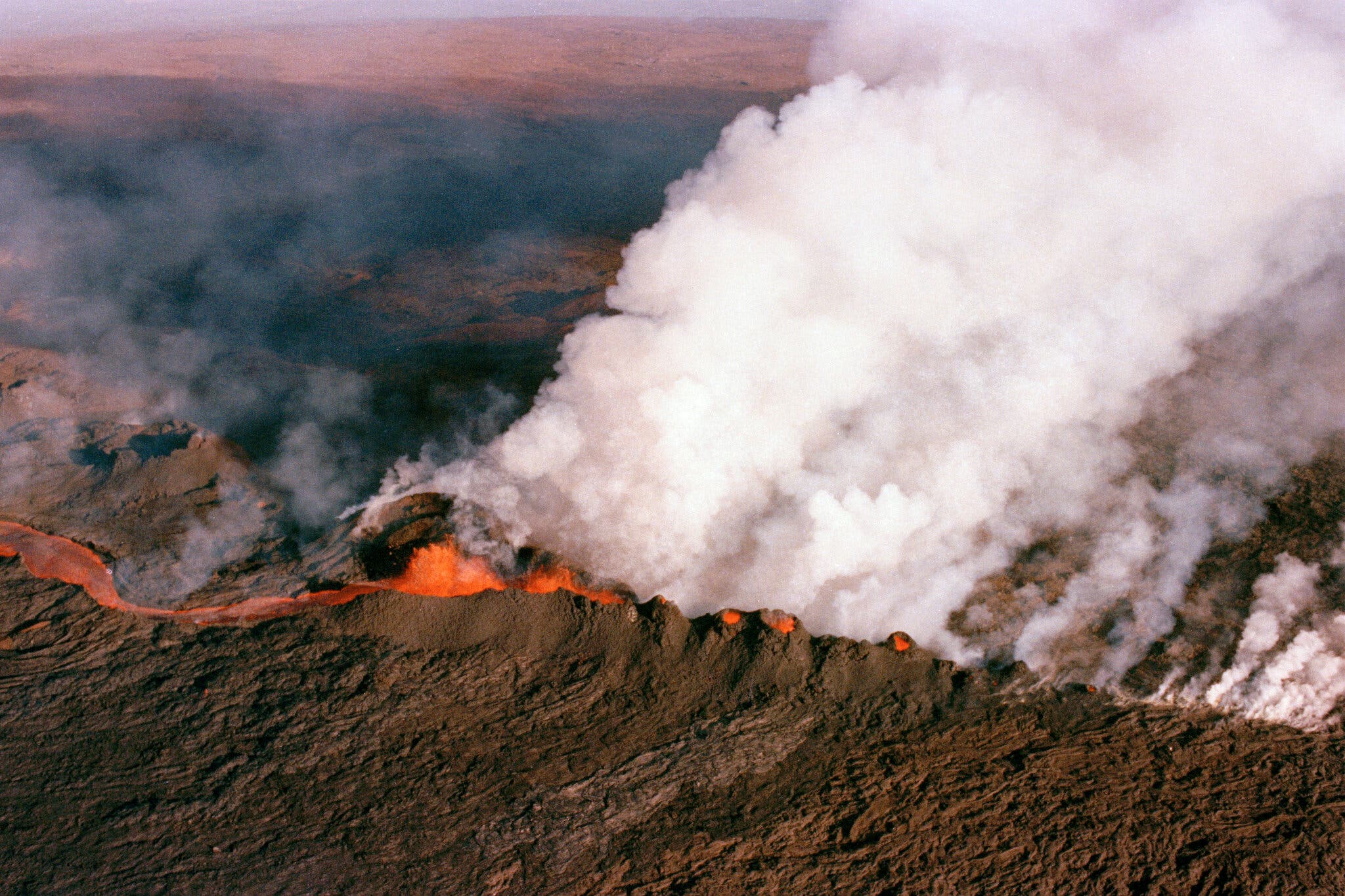 The return of the volcano to erupt after hibernation

Late Sunday night (November 27), seismometers around the volcano's summit began showing more activity, and the tremors were getting shallower, a telltale sign that magma is moving upwards.

The eruption began at the top of the mountain, when magma rushed through cracks in the rock and filled the bowl-shaped crater (caldera). The eruptions started at the summit and moved into the rift zone, but scientists didn't know which path the magma would take this time. The northeastern wing, which is far from the population, that the southwest, which puts thousands of people at risk. Even after the eruption began, scientists did not know that the eruption had moved to the northeast until an aircraft flew over the fault area and lava was seen seeping out. 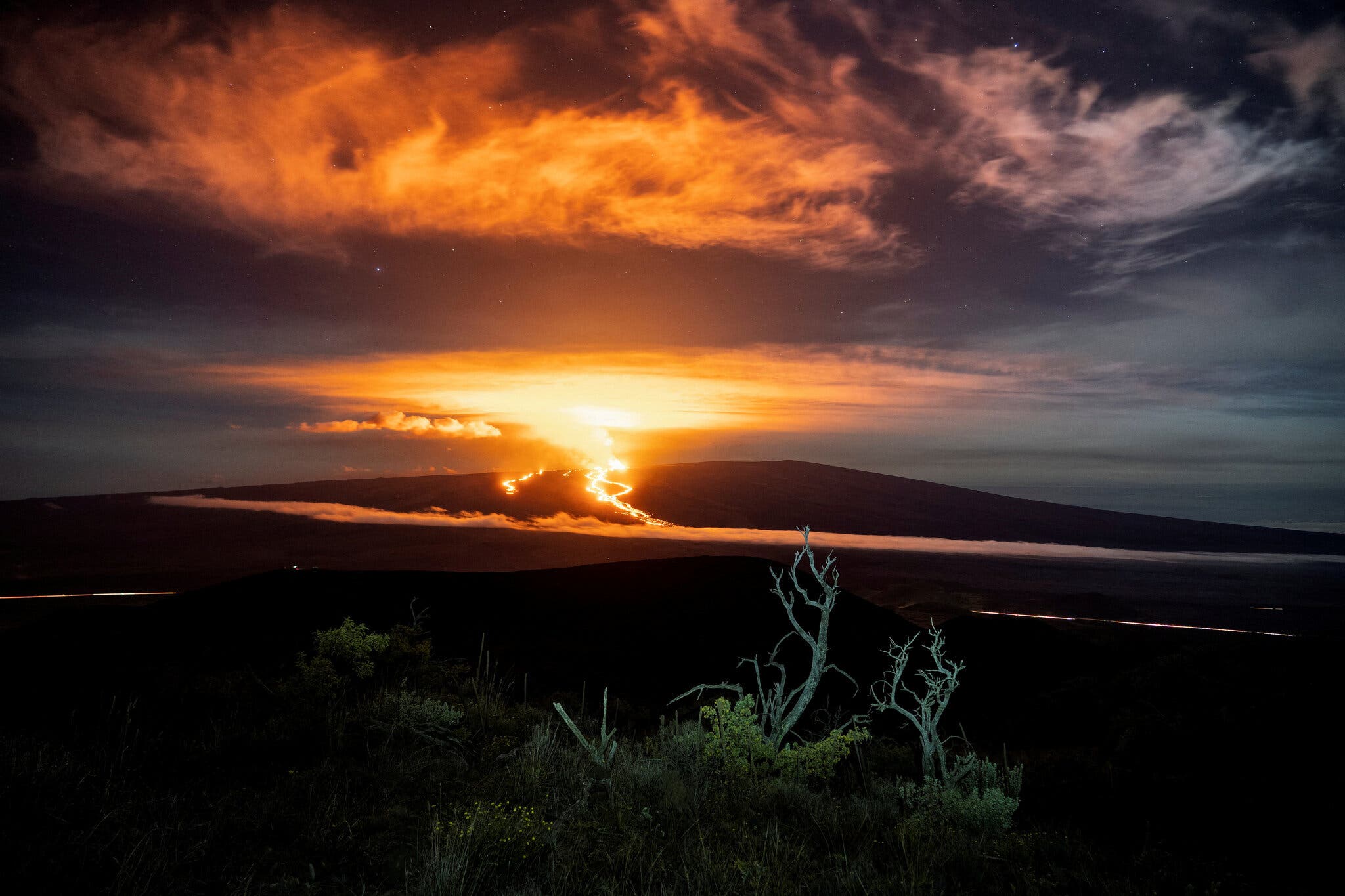 Since then, magma has continued to erupt from the Northeast Rift Zone, rushing upwards in red fountains, and scientists aren't sure what might happen next.

Meanwhile, volcanologists and seismologists are trying to decipher the incoming data by placing more monitoring tools around active areas and collecting more satellite images of the mountain's surface. For some Big Island volcanologists, this is the first Mauna Loa eruption of their lives.