Messi leads Argentina to victory over Honduras in Miami 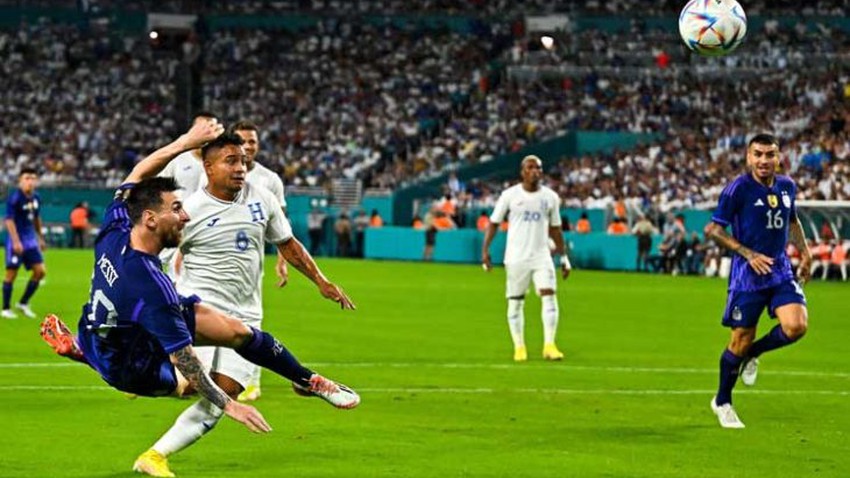 Weather of Arabia - Lionel Messi scored two goals and Argentina dominated its match with Honduras to win 3-0 in a friendly last night in Miami, as the World Cup soccer team continues to develop its style before the tournament to be held in Qatar.

Messi was at the center of the event since the start of the whistle, as he passed to Papu Gomez, who found his colleague Lautaro Martinez to open the scoring early.

And the 35-year-old Messi was fouled inside the penalty area in the 39th minute by Honduran player Debbie Flores, who received a yellow card.

Messi's colleagues immediately intervened in front of the Honduran players and the players exchanged words, but without a clash between them. The Argentine captain continued on the field.

And near the end of the first half, Argentine Marcelo Santos blocked Giovanni Lo Cielo, so Messi calmly took a penalty awarded by the referee to make the score 2-0.

Argentina continued to perform strongly in the second half, extending its unbeaten run to 34 matches.

Enzo Fernandez snatched the ball in the 69th minute and sent a perfect pass to Messi, who shot it over the goalkeeper's head to delight the fans at Hard Rock Stadium.

Argentina continued to entertain the fans when Messi tried to shoot a ball in the last minutes of the match, but it came far from the goal.

Argentina will play another friendly match against Jamaica next Tuesday in New Jersey. Two-time World Cup champion Argentina is among the favorites to win the World Cup in Qatar. It will play its first match in the group stage against Saudi Arabia on November 22.