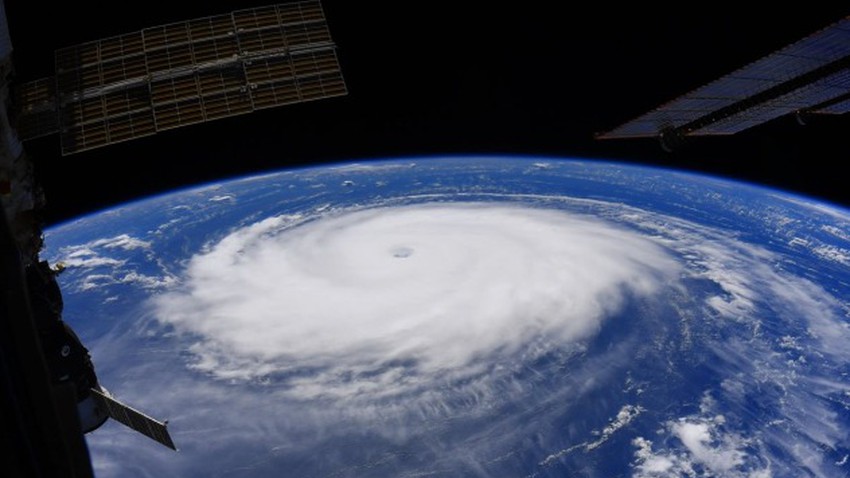 Weather of Arabia - Astronaut Megan MacArthur shared three amazing pictures of the huge Atlantic hurricane "Sam", as seen from the International Space Station, where wide clouds and the distinctive eye of the storm appear.

Fortunately, Hurricane Sam hits over the Atlantic Ocean without posing much of a threat to people on Earth, but astronauts who live and work on the International Space Station must regularly photograph Earth from space, and now Hurricane Sam makes a special appearance.

The storm is currently located east of the US territory of Puerto Rico; Current forecasts from the National Oceanic and Atmospheric Administration's (NOAA) National Hurricane Center say the hurricane will also pass into eastern Bermuda as early as Saturday (October 2), and then southern Canadian Maritime Provinces as early as Monday (October 4). .

At the moment, the only threat that the center confirms is the threat of high altitude occurrences on the islands of the Atlantic Ocean and the east coast of North America.

Hurricane Sam, which first formed midway between South America and Africa on September 22, turned into a tropical storm the next day, then quickly intensified into a full-blown hurricane.

Currently, the storm maintains wind speeds of up to (215 km/h), making it a Category 4 hurricane, although the National Hurricane Center expects that rating to fluctuate slightly as the storm progresses.

Hurricane Sam is the 18th named tropical storm of this year's hurricane season, which began on June 1 and ends on November 30. There are only three other storm names left on the forecast list.

Although Hurricane Sam poses a much lower threat than some of this year's other storms, such as Grace, Ida and Larry, it does indicate the severity of the overall hurricane season for 2021, which was projected from the outset to be particularly difficult.

These hurricanes are just one weather phenomenon among the multiple effects of soaring carbon emissions over the past decades, and although climate change does not cause storms to form, it does increase the frequency of powerful storms by heating the water that fuels hurricanes, and increasing the amount of water that causes storms to form. Air can hold it. Additionally, factors such as sea level rise make people more vulnerable to the effects of any given storm.