The most important passages, water crossings and international trade arteries 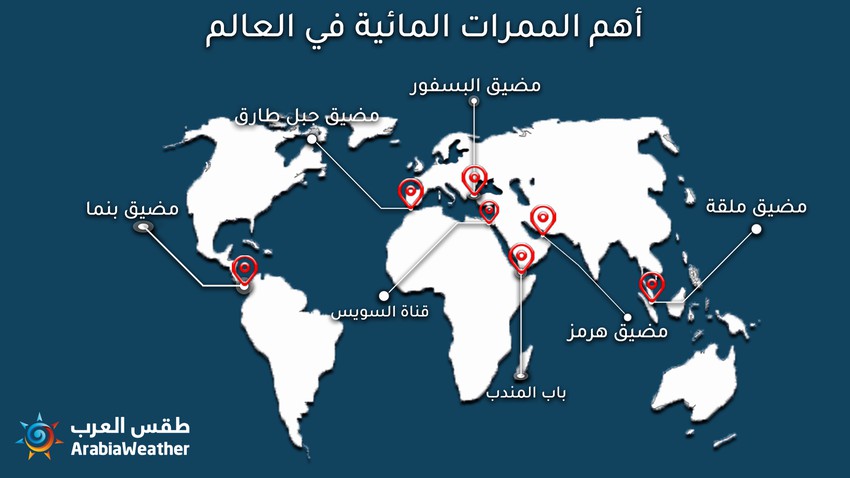 Arab Weather - After the accident of the Evergiven stranding in the Suez Canal and its closure of the waterway and causing disruption to traffic and maritime transport, the world was more alerted to the importance of waterways and their role in global trade, as if these crossings are the arteries of the earth through which international trade passes.

We cover here the most prominent waterways and crossings in the world:

1. The Suez Canal: An artificial waterway that took 10 years to build (1859-1869) between the Egyptian city of Port Said (on the Mediterranean Sea) and the Egyptian city of Suez (on the Red Sea), so that the canal would allow ships coming from Mediterranean countries, Europe and America to cross to reach To Asia without taking the long Cape of Good Hope Road, and the Suez Canal is currently the most important shipping route in the world, as it controls 40% of the movement of ships and containers in the world, as well as connecting the countries of Southeast Asia, Europe and the Americas .

The Suez Canal is 162 km long. The width of the channel in the north is 345 meters, and the width of the bottom is 215 meters. In the south, it is 280 meters wide, and the bottom is 195 meters wide. As ships travel in the Suez Canal in general in one direction and then follow the ships in the opposite direction. For this purpose, there are three wide places where ships can pass back and forth at the same time, and the length of those places is 78 km, and they are: at Port Said, at the Al-Balah crossing, and at the Bitter Lakes .

2. The Strait of Hormuz (Bab al-Salam): It connects the waters of the Arabian Gulf with the waters of the Gulf of Oman, the Arabian Sea and the Indian Ocean, and it is the only maritime outlet for Iraq, Kuwait, Bahrain and Qatar. Its width is 50 km, 34 km at its narrowest point, and its depth is 60 m, and it is one of the important waterways. About one-fifth of the world's oil production passes through it, and 20-30 oil tankers cross the strait every day, that is, an average of one oil tanker every 6 minutes in peak hours, loaded with about 40% of the world's seaborne oil . In addition to oil, 22% of the world's commodities pass through the strait.

3. Bab al-Mandab Strait: The Bab al-Mandab strait connects the Red Sea with the Gulf of Aden and the Arabian Sea, the approximate distance between its banks is 30 km, and the strait separates into two channels of Brim Island of Yemen. There is the eastern channel known as Bab Iskandar, 3 km in width and 30 m in depth. The accuracy of the mayon, it is 25 km in width and 310 m in depth, which is one of the important waterways, especially since the width of the ship crossing channel that lies between Brim and the African mainland is 16 km and its depth is 100-200 m. This allows various ships and oil tankers to easily cross the pass in opposite directions. It is estimated that more than 21,000 ships and giant oil tankers pass through it in both directions annually.

4. The Bosphorus Strait: It connects between the Black Sea and the Sea of Marmara. It is located with the Dardanelles Strait on the border between Asia and Europe. Its length is 30 km, and its width ranges between 550-3000 meters. The ship traffic in the strait is one of the most important points of maritime navigation in the world. In 2004, the number of ships passing through the strait reached more than 53,000 . But navigation may be difficult due to the narrow strait in some areas, and the passage of dangerous water currents through it, and some accidents have occurred, including the collision of two ships carrying oil in 1994, and the sinking of a Panamanian ship in the strait in 2005.

5. The Panama Canal: An 82 km long artificial waterway linking the Atlantic Ocean with the Pacific Ocean, inaugurated in 1914, which helped shorten the time spent by ships between the Atlantic and Pacific Oceans, the Republic of Panama regained its sovereignty over the canal after the United States administered it for 85 years . Fourteen thousand ships pass through the Panama Canal annually .

6. The Strait of Gibraltar: The Strait of Gibraltar is located between the Iberian Peninsula in the north and North Africa from the south, so that it connects the Mediterranean with the Atlantic Ocean, and the western entrance to the strait is bounded by Cape Spartel in Morocco and Ras Trafalgar in Spain, and the name goes back to Commander Tariq Ibn Ziyad, who crossed it at the beginning of the Islamic conquests of Spain in 711 AD, has a depth of about 300 meters and the shortest distance between its banks is 14 kilometers. The strait is one of the most important sea crossings in the world .

7. Malaga Strait: It is located between the island of Sumatra in Indonesia, the peninsula of Malaysia and Singapore, as it connects the Indian Ocean, the South China Sea and the Pacific Ocean, and thus it shortens the road between the Middle East and Asian markets (China, Japan and South Korea), and about 16 million barrels of oil travel through it. Every day, liquefied natural gas is transported through it from the Arab Gulf region and African suppliers to East Asian countries. The strait is the second busiest marine choke point in the world.