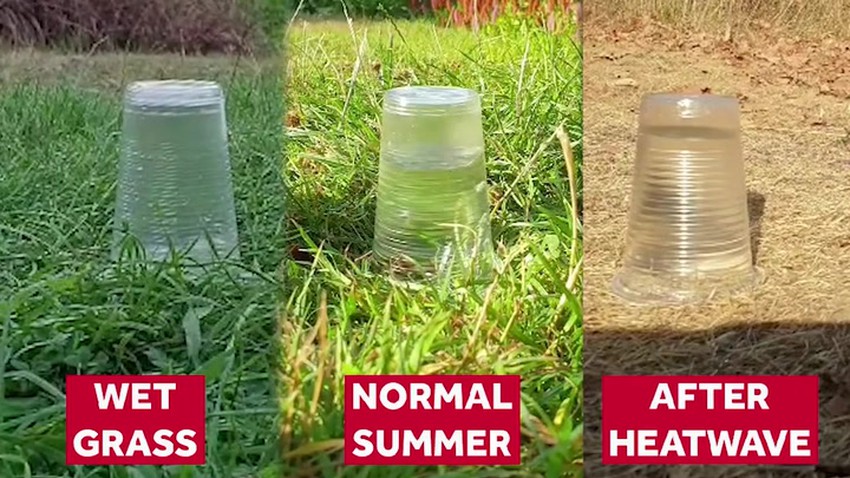 Arab weather - We usually rejoice in heavy rain after a long period of drought, but what actually happens is that the heavy rain water that falls after drought poses a great threat and may cause flash floods, and since climate change increases the likelihood of recurring droughts and extreme weather, This phenomenon is likely to become more frequent, increasing the potential for loss of life and property.

But how does that happen? What causes an increased risk of flash floods after a drought period?

Although the soil is thirsty for water!

With three glasses of water, a British scientist explained how drought conditions can increase the risk of flash floods once the rains start.

In the experiment, Dr. Robert Thompson of the University of Reading's Department of Meteorology filmed himself at different times of the year overturning a clear plastic cup filled with water on the same plot of land but under different conditions.

In this experiment Dr Rob Thompson of @UniRdg_Met shows just how long it takes water to soak into parched ground, illustrating why heavy rainfall after a #drought can be dangerous and might lead to flashfloods. @R0b1et @UniRdg_water pic.twitter.com/zbb3xLTXdK

In the video, the footage clearly reveals how weather conditions affect the rate of water absorption in the soil:

Explanation of what happened in the experiment:

Dry and hard earth does not allow water to enter as effectively as wet earth, there are a number of reasons that occur but [most importantly] the soil is compacted, the moisture has been removed by evaporation as if the soil had been baked under the heat of the sun.

In addition, soil particles become more hydrophobic, and surface tension helps prevent water from entering microscopic cavities in the soil. Because the soil resists the entry of water, the water quickly accumulates on the surface, or flows on the slopes, which causes sudden floods that occur within a short period of time, which usually results in large losses, and heavy rainfall after drought is not effective in irrigating dry soils. , so that the water accumulated on the surface evaporates with the heat of the sun, and will not help much to compensate for the water shortage.

If an area has recently experienced a drought, the soil will be too dry and difficult to absorb rainwater. This is why flash floods often occur in desert areas, and in areas with shallow soil over hard surfaces. Floods can also occur in areas that have received recent rains, where the soil may not be able to hold as much water.

The danger of flash floods is that they usually surprise people, and they can cause rivers to overflow because the water flows quickly downstream, and rainwater also flows into low-lying areas in cities, which may be roads, parking lots, subways and basements in homes and buildings. Air can flood homes and sweep away vehicles.

With climate change, experts believe these events will intensify, with more severe hurricanes expected from global warming. Hydrologists and engineers are working to understand how to improve this, including by modeling flood events and development trends so that they can increase resilience to hazards in urban and rural areas.

You may also be interested in: Sponge Cities .. China's Weapon Against Floods