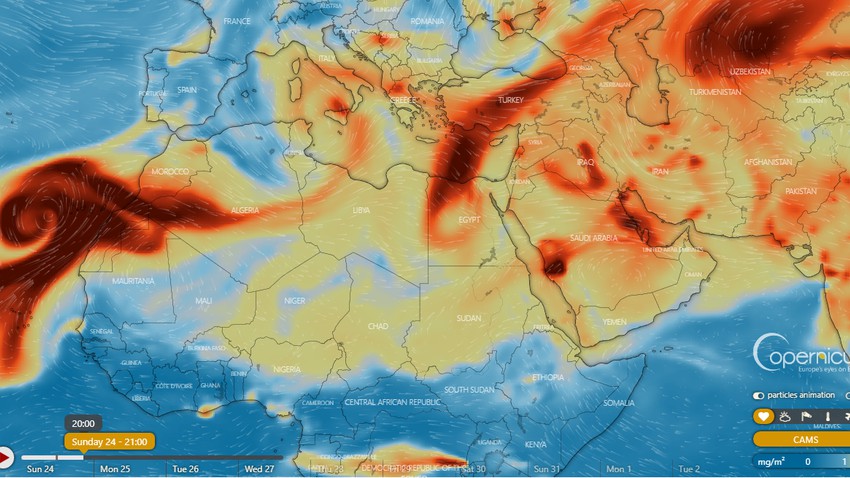 Arab weather - About a month ago, the volcano of the Spanish island of "La Palma" was spewing lava and gases without any indication that its eruption had stopped, and experts had warned of gaseous emissions resulting from the volcanic activity of the "La Palma" volcano, while expectations were transmitted that these gases would reach Egypt today. Sunday, what is the truth about the arrival of volcanic gases to Egypt? And how dangerous is it?

The danger of La Palma volcano gases on Egypt

Dr. Abbas Sharaki, Professor of Geology and Water Resources at Cairo University, explained that the La Palma volcano emits more than 17,000 tons of gases per day, and these gases are currently spreading around the world, and the direction of the wind affects its movement, and part of these winds come from the Mediterranean Sea towards Egypt .

Sharaki confirmed that these gases will reach Egypt during the days of Sunday, Monday and Tuesday, and they are dangerous to health, but their impact will be limited due to their high altitude above the surface of the earth, as these gases are located at altitudes ranging between 3 thousand and 5 thousand meters and thus their impact on humans on the surface The land is very little and almost non-existent.

And Dr. Abbas Sharaki explained that the main gas emitted from the volcano is sulfur dioxide, which is a transparent gas and has a distinctive smell, such as the smell that is issued by lighting a match, which is a poisonous gas that interacts with oxygen and water, and is sulfuric acid, and it can, if it is on the surface of the earth, It causes suffocation and inflammation in the eyes, and affects more patients with chest allergies, but there is no effect in European countries or in Egypt because of the presence of these gases in high areas.

The professor of geology at Cairo University explains that "what caused the presence of gases at great heights is the placement of volcanic craters and their height above sea level by about 1,300 meters, in addition to the fact that there are mountainous areas located on the same island where the volcano is located at an altitude of 2500 meters and it acts as a wall that prevents Gases at lower altitudes only when the gases are above 2,500 meters do they start to spread towards Europe or our region.”

The Astronomical Research Institute headed by Dr. Gad Mohamed El-Qadi, President of the Institute, revealed the truth of what was circulated on some social media sites and some media outlets about the effects of the La Palma volcano eruption in the Canary Islands and the acid rain and high concentrations of sulfur dioxide that might be left behind.

The institute confirmed in a statement that based on the models of the spread of emissions from the La Palma volcano, which has been active since last September 19, as well as the Etna volcano in southern Italy, which was recently active in the morning of October 21, using the maximum possible emission from the La Palma Watna volcano, it was found that the effect of these volcanoes during The month of October on the Egyptian lands is very weak and in small concentrations, and within the safe limits.

He stressed that, according to the worst-case scenario, in the event of rain, the largest concentrations would not exceed 0.0010 parts of sulfur dioxide per million parts of air, which is a thousand times lower than the limits that represent a public health risk.

The institute indicated that it will continue to monitor emissions and forecast their effects during the coming period, and will update these data on the institute's official page.