`Winter` depression in May 2020 ... one of the most rare rare weather phenomena during it 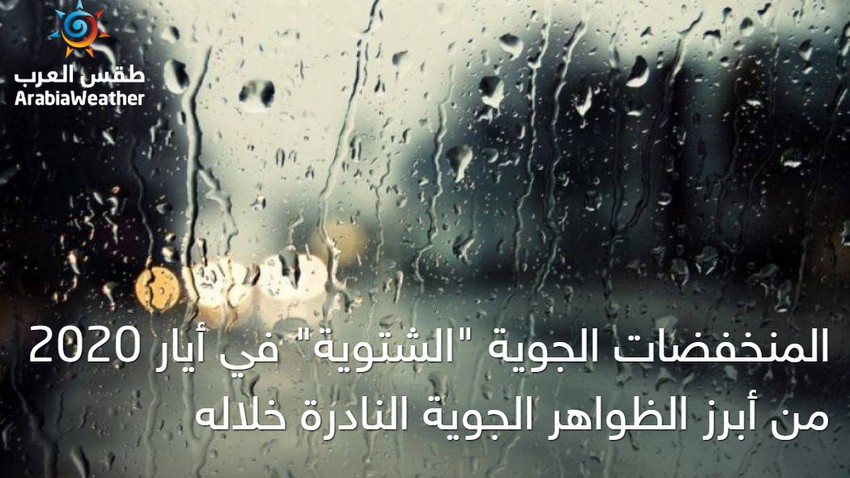 Arab Weather - This month of May has been characterized by its many distinct weather phenomena. In addition to the variations in temperature and heat wave that are among the longest in Jordanian climate records, the Kingdom was affected by depressions that are unusual at this time of the year.

Here, it is necessary to differentiate between the rain that recurs in the month of May every year that is caused by the impact of instances of air instability, and the rain of May 2020 that was the result of the impact of air depressions.

What is the difference between air depression and atmospheric instability?

It arises in one region and moves regularly to other regions

It is easy for the weather forecaster to determine the locations and intensity of precipitation associated with it.

It is accompanied by a decrease in temperature, cold, rainy weather and snow, depending on the type of air mass accompanying it.

Precipitation is uniform in its geographical distribution .

Precipitations are irregular in their geographical distribution, sometimes heavy rains, and may be in a short period of time .

Precipitation can occur in a certain area, while others close to it may not experience any rainfall .

They are associated with atmospheric phenomena: falling winds, sand and thunderstorms, and hail.

It is noteworthy that on May 5-6, the Kingdom was affected by an air depression, classified as a third degree according to the Arab weather classification for air depressions, accompanied by a cold air mass that worked on a significant and significant decrease in temperatures and western wind activity in various regions of the Kingdom, which worked on the occurrence of dust waves In the eastern, southern, and desert regions, and consequently, the horizontal visibility is low.

On 9 May 2020, the Kingdom was affected by a depression accompanied by a relatively cold air mass, accompanied by a sharp and significant decrease in temperature, to become much lower than usual for such a time of year, wind activity, thunderstorms from rain, and heavy dust . (Included with videos of rain and dust)

On the 23rd of May 2020 (the first day of Eid Al Fitr), the Kingdom was affected by another air depression accompanied by a relatively cold air mass, accompanied by a decrease in temperature, precipitation and wind activity, a which was also rare for this time of year.

However, what is the scientific explanation for the formation of the depressions in May?

The northern part of the globe witnessed extreme behavior of the polar vortex, which allowed for large fluctuations in the distribution of cold and hot air masses, and thus the cold air masses rushed towards the south more than usual during the month of May of each year and therefore, depressions of a winter nature are formed in Late spring.

Is this weather phenomenon occurred before May 2020?

The formation of depressions and rainfalls in May (especially the second half of it) is generally considered rare, but it has already happened, but this year was marked by the cold blocks associated with the depressions that occurred in May, whether in the Levant region or elsewhere.

Is the number of depressions affected by the Kingdom during the month of May 2020 considered normal?

The number of depressions during the month of May 2020 is considered unusual and at a higher pace than normal, and was accompanied by higher amounts of rain than the average for May.

Is the path of cold blocks accompanying the May 2020 depressions normal?

The path of cold blocks accompanying Mayar depressions is normal. May is famous for temperature fluctuations each year, but these blocks are cooler than usual, as they are colder than usual for this time of year.

Can these depressions continue during the coming period?

Statistically, the opportunity for the formation of depressions during June is considered very weak, and occurred only in a few years such as 1992 and 2018, but given the persistence of extreme behavior of poles during this period, it is not excluded the possibility (even if it is weak) of forming an air depression or an extension A depression in the eastern Mediterranean during the second half of the month.

Do these low rainfall and rainfall affect the quality of seasonal crops?

The Director General of the Jordanian Farmers Union, Mahmoud Al-Oran, confirmed that the rainy conditions that occurred in the month of May were accompanied by a hail, which negatively affected the fruit trees, especially those that were in the "fruitless" stage, as it led to scratches in those fruits.

He added that these scratches are a fertile environment for fungi, insects and fungal diseases, as it has harmed farmers commercially and economically.

He pointed out that the heavy rains that accompanied the weather conditions lead to the loss and loss of fruits.

As for the field crops "wheat and barley", they were in the stage of harvesting and may lead to the emergence of diseases due to the low temperatures that accompanied the weather.